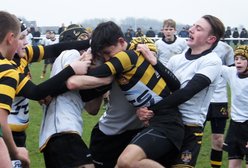 Leigh visited Orrell on a freezing cold Sunday morning expecting a tough, physical encounter as per our meeting earlier in the season.

On arrival at the pitch it was clear to see what Orrell had in store for the lads as the playing area was no bigger than a postage stamp, therefor trying to nullify our attacking threat out wide.

What followed was an incredibly clinical display of skill, speed, power and determination from all the boys to systematically break down a very determined and aggressive defensive pattern from the hosts.

The forwards were magnificent, with ball being recycled quickly at the breakdown and outstanding rucking and counter rucking taking place to set a platform for wave after wave of attacks. Add to this around half a dozen turnovers and it was clear to see that they were in total control.

The backs were on fire, with quick, crisp passing and with excellent angled lines of running they made light work of the tight pitch to run in several top class tries. Decision making was perfect giving Orrell's outside backs major problems throughout.

Big Jack T tore the opposition to shreds (despite a twisted knee early in the first half), scoring 3 more to bring his tally to an incredible 32 from 12 games. Tyler B and Tom B also had strong games out wide and both got on the scoresheet. The outstanding Danny E, probably the most skilful forward in the league, crossed the line twice, his second an amazing effort from a chip and chase from 40 yards, leaving the full back for dead on his way to the line. One more try was scored but it was so cold we cannot remember who it was.
Jack M converting 3 times.

Even with the unlucky Leon M in the sin-bin (wrong decision) Leigh were in total control during the last 10 minutes showing how hard they work in training with no signs of fatigue despite playing at such a high level for 60 minutes.

Tane B pushed Danny E for the man of the match award but this was a TEAM effort once again and it's clear to see that the lads give their all for each other. To do what they did to a strong Orrell outfit, in the freezing cold, on a tiny pitch and at times down to 14 men is testament to how far we have come.

The whols squad deserves a special mention this week for creating the performance of the season but i need to add that the substitutes who rolled on and off and kept the momentum going were brilliant. It is really difficult at times to get 25 players on and off the pitch and play for a decent amount of time but everyone has a fantastic attitude and no-one ever complains which is much appreciated.

Thanks to Orrell for a very competitive game.

Lets keep this going now boys, as i said to you after the game there is no-one to fear and no reason why we can't fight for silverware come April.

Well done fellas, proud of you.

Meet at Orrell at 10am.
Shirt and tie.