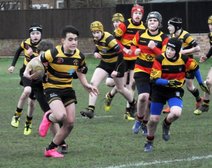 U14's round off cup group stage with impressive victory.

The Dragons travelled to Southport in the final group game of this years Lancashire cup knowing we were already through to the knockout stages but looking to finish strongly to keep momentum building for the quarter finals.

Leigh started strongly and camped in the Southport half with only a couple of wayward passes stopping Leigh from scoring and eventually Southport clearing their lines.

The breakthrough came around the 10 minute mark when from midfield on the halfway line the outstanding Jack M spotted a gap on the right, threw his trademark dummy and shot through the hole and after stepping he full back with ease, he touched down under the posts for an excellent score, converting his own try for a 7-0 lead.

Southport battled hard and belied their lowly position in the table but Leigh were in no mood to give anything away. Tane B and Ben C were causing chaos with their carries and the former was next to score with a smart dummy and great speed for a number 8 that saw him blast over from 30 yards out. Jack M converting for a half time lead of 14-0.

The lads knew that Southport would come hard after half time and this was the case but Leigh repelled them and got back on the front foot. After great work again by the forwards and Ben Ma and Ethan W going agonisingly close it was Jack M again who scooted over with lightning speed off the mark, again converting his own try for a score of 21-0.

Leigh were now fully in the ascendancy, Ben C was running riot, Leon M was breaking the line at will and Loui B was outstanding at full back, making massive yardage gains.
It was Ben C who crossed next with an outstanding solo effort from distance down the right, showing incredible strength and speed to score. Jack M slotting the extras again. 28-0.

That was the end of the scoring but what happened next was the most pleasing part of the morning. Leigh gave away penalty after penalty and spent the final 10 minutes in their own 22 but time and time again they put their bodies on the line and smashed into the big Southport forwards with Oli N, Jack A, Tane B and Ryan C immense in the middle and Ben T, Ethan W and Sam M stopping anything that came out wide meaning the game finished 28-0.

This was a massive display of committment to each other. Every player gave all they had for the team and got the rewards.
Finlay T was superb as captain, Ikey H was strong at both full back and scrum half and with the forwards of Ethan H, Ben Mc, Jack A, Oli N, Ryan C, Joe M, Ben C, Tane B, Harry J, Fabian W and Crusher C putting in huge performances Leigh got the result they deserved.

Special mentions this week are for Jack M who was devastating with the ball, Oli N, Ryan C and Jack A who tackled themselves to a standstill and to Ben C who was the best player on the field by some distance.

Extra praise goes to Joe M. What you don't always see is what goes on behind the scenes and Joe is currently battling with a painful big toe problem which requires daily treatment just for him to be able to get his boots on. Because of his toughness and not wanting to let his team mates down he is playing through the pain barrier. Great stuff Joe.

This week is Wythenshawe at home.

Keep up the good work boys.

Meet at Southport at 10am in shirt and tie.