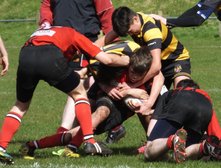 Leigh travelled to close rivals Bolton for their first meeting in over 18 months.

The fixture was highly anticipated due to the competitiveness of both teams in previous encounters. And it did not disappoint.
Leigh were quick out of the blocks and controlled the early exchanges with the forwards battering into their opponents with and without the ball and the backs moving the ball around freely.
The deadlock was broken when powerhouse Danny E handed off defenders at will to blitz over out wide, Jack M converting from a difficult angle. 0-7.

A mistake from the kick off allowed Bolton good field position and they capitalized immediately with a close range effort. 7-7

The rest of the half became nip and tuck with neither team willing to give an inch but it was Bolton who buckled and after another smooth shift left by the backs, Tyler B raced over for another one of his deadly finishes. 7-12 half time.

Leigh made several substitutions at half time and the impact could not have been better. With his first touch Duran scattered several defenders and raced in untouched from 60 yards for a fabulous try. Jack M slotting the extras. 7-19.

Bolton would not lie down though and replied with a try of their own to set up a pulsating final 10 minutes. 12-19

Leigh defended resolutely to repel the Bolton barrage and gradually regained control of the game. A few chances went begging before the game was finally put to bed in the last minute by the outstanding Tane B, who slammed the ball down despite the attention of 3 desperate Bolton defenders. Jack M slotted a magnificent touchline conversion to complete the scoring and set off the lads wild celebrations.

A fantastic game between two excellent teams. Leigh showed a huge amount of desire and high skills levels to record yet another outstanding victory against another team that was ranked higher than them at the start of the season.

Thanks to the referee who had an excellent game and managed to dampen down a couple of potentially heated moments.

Next up PGH in the development cup semi-final. Full steam ahead, we still have a chance of silverware.