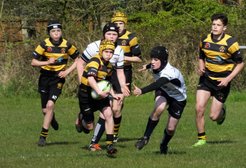 Leigh entertained PGH in the development cup semi-final, a competition designed for the losers of the Lancashire Cup quarter finals.

Going into the game it was 1-1 over the season so a tight game was expected.

Preston started strongly and with their big forwards running hard they had Leigh pinned in their own 22 for the first 10 minutes. But Leigh did not break, magnificent goal line defence time and time again frustrated PGH and eventually Leigh got out with 2 great turnovers coupled with excellent clearing kicks from Jack M.

This galvanised Leigh and seemed to deflate PGH and not long after Leigh got on the scoreboard. A flowing move down the left culminated with Tom B racing clear, once Tom gets in the open he won't be caught and he raced in untouched. Jack M converting. 7-0.

Now in total control Leigh moved upfield once more and after yet another break down the left Joe M screamed onto a pass from 30 yards out to touch down under the posts. Another Jack M conversion made it 21-0.

Jack M was next on the scoresheet, from 50m out he threw an outrageous dummy and left defenders for dead to scoot clear. 26-0 half time.

The half time talk consisted of staying focussed and not letting PGH back into the game. The lads took this on board and killed the game immediately with a great try from the outstanding Jack T.

A host of changes were made but this did not deter Leigh, each replacement carrying on the great work and soon it was the turn of hooker Ben Mc, popping up at centre to crash over for a well deserved try.

The final score came from an individual piece of brilliance from Danny E, placing a fantastic kick over the on rushing defence to allow Ethan W time to regather and power over.

An outstanding performance in hot conditions against one of the competitions elite teams. Praise to all the boys for such commitment, especially early doors when they were under the pump and defended for their lives.

Credit to all the forwards for laying the platform with hard work and to the backs for playing with such style and speed.

Special mentions this week must go to Jack M and Jack T, without doubt the best midfield partnership around and were both outstanding.

Next up, THE FINAL v Rochdale. Go and get it boys, you deserve it.