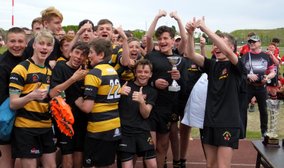 U14's finish season on a high.

Leigh Dragons U14's have returned from Lille with silverware after taking part in the Pierre Delorme tournament in Lille which included teams from the UK, France, Holland and Belgium.

Without breaking the golden rule of 'what goes on tour, stays on tour' here is hopefully a flavour of what took place.

The tour party, consisting of 21 eager players and 24 sensible (ish) adults, converged on the club on Friday 28th at 2pm to take part in pre-journey refreshments. These were enjoyed by all and the party left around 4pm to cheers from the home alone mums.

The trip across the channel was a sedate affair and went without a hitch, the only issue being on arrival at the hotel at 4am on Saturday morning some of the adults were walking like they were still on the boat.

As training for the lads was arranged for 3pm on Saturday at the tournament venue it was agreed by all to take in a walk at lunchtime to remove the lingering jet lag that seemed to have affected some of the group, fortunately none of the lads had been afflicted which was a stroke of luck. Luckily we came across an establishment which supplied a golden remedy for jet lag and a kind man offered to sell us several doses which did the trick.

So it was off to the tournament host L.O.R.C for a training session and a meet and greet. We met up with Farnham U14's from Surrey and played out 2 x tag matches which were excellent practice. The adults from both teams did their bit also, sampling the local brew in the clubhouse for quality, and it passed with flying colours at the 8th attempt. The lads needed an early night so it was off back to the hotel for a spot of dinner and all were tucked up in bed by 10.30pm.

The tournament day arrived and was met with a degree of trepidation, the lads wondering what standard their European counterparts would perform at and the adults hoping that the barrels had undergone a refill following the previous day's joviality.

We were drawn in a group with teams from Holland, France and Belgium (names escape me) with games to be played over 7 minutes. First up were the French and what a dour affair, kick after kick with no ball movement from the opposition meant a stale 0-0 draw.
Next up were the Dutch and Leigh found their form, victory came from a great try from Big J and conversion from Little J.
The scene was set for the group decider and place in the main semi final draw. The Belgians put a spanner in the works and scored in the first minute to lead 7-0. Leigh bombarded the opposition and got their reward with another Big J try out wide. 7-5 and game on. Leigh needed one more score and in the last minute Sam broke clear out wide and set off down the wing, the crowd held their breath, one dad even put his pint down, would Sam go all the way? Unfortunately he was tackled and the game was done meaning a second place finish in the group and a place in the tier 2 semi-finals lay ahead.

Farnham 1 were dispatched in the semi- final by yet another Big J try leaving a final versus the very friendly and popular Stade Olympique from Paris. The game was frenetic from the outset with both teams hammering each other. Leigh were on the end of some shall we say 'dubious' calls from the (French) referee but hung in there. The reward came when late on Loui B scorched over after a flowing move to send the team and adults crazy amongst the Parisians. Game won and the tier 2 trophy was ours with a 5th place overall ranking.

After the shackles had been on all weekend it was time to party whch we certainly did, fun and laughter went on long into the night before the early start on Monday to get back to Blighty.

This was an outstanding trip, the lads were magnificent on and off the pitch and behaved impeccably. The adults did their bit too for Anglo-French relations, pumping money into the local economy and funding further research into a cure for jet lag. It is also rumoured that L.O.R.C rugby are to make a bid for Owen Farrell with the weekends bar takings.

Huge thank you to L.O.R.C for their wonderful hospitality and outstanding tournament and i would advise any teams to go on this trip without any hesitation.

Special mentions to Marie and Nathan for the organisation and to Jacko and Posh Scouse Ian for arranging the finer details such as tour t-shirts and restaurant bookings.