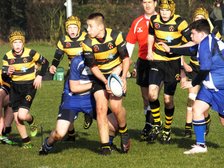 Dragons finish the year in style.

U14's rack up another big win.

Leigh U14's visited Sale on Sunday for their final fixture of 2016 and mark the halfway point of a so far successful 2016/17 campaign.

On paper Leigh had a difficult task, Sale had been in good form in recent weeks and on arrival we wondered if we had found the correct pitch as the Sale boys were huge and it looked to be a daunting prospect in front of us.

But we didn't need to worry. There is a toughness to this side that is growing week on week and despite Sale matching Leigh in the early exchanges they soon got on top with 2 tries in the first period from the unstoppable Jack T. First period 0-10

As per last week, Leigh made a host of changes to make sure the whole squad gets long game time and again as last week, it was a seamless transition, showing a massive strength in depth which gives the coaches headaches when trying to pick teams.
Tyler B blasted over for a great try before Tom B got in on the act with 2 long range tries, his first a contender for try of the seaon after scorching in from 70 yards. Jack M converting two of the three tries.
With the score at 29-0 Leigh switched off for a split second and allowed Sale to score in the corner, it just shows that you have to concentrate for the whole time at this level. 2nd period 5-29.

The final period again saw numerous changes and the game became a bit heated but Leigh stood their ground and kept their heads to play some more fast, expansive rugby as well as keeping up the hard work in the middle with bone crunching defensive hits from all the forwards paving the way for the backs to run wild. 2 more tries for Jack T, one a fantastic team effort where the ball went through 4 sets forwards hands, took Leigh out to 39-5.

The last word went to Sale with a try in the corner but it was to be Leigh's day. Thanks to Sale for being excellent hosts.

It's time for a well earned break but we need to be straight back at it after Christmas for West Park in the cup, a huge fixture for us if we want to progress further.

Well done boys, you have been outstanding for the first half of the season, keep it going.