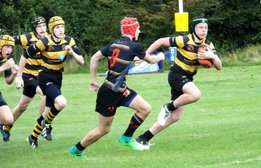 Back with a bang

Leigh Dragons kicked off their 2017-18 season with a win against a much improved Tarleton side who pushed Leigh all the way in an entertaining contest.

With Richard 'Shandy Bass' Taylor in attendance there were a record number of ladies at the game, all jockeying for position near the Leigh Legend. Big Ron Turner was irate at being upstaged as has vowed to carry out this weeks warm up topless, exposing his Tom Sellick like chest covered in baby oil.

Back to the game, which was played in 3x20min thirds to allow plenty game time for the strong squad of 22.

Leigh started brightly and controlled the early exchanges but Tarleton opened the scoring with a breakaway try. 0-5

The Dragons then hit back immediately when a flowing move was finished off by flying winger/second row slugger Ethan W in the corner.
Jack M kicking a magnificent goal line conversion. 7-5

Leigh went straight back onto the attack and soon after new boy Duran W blasted over, showing his immense power and speed to score wide right. Again Jack M slotting from a wide angle. 14-5

The second '3rd' saw changes made and the introduction of Crusher Cleary gave Leigh fresh impetus, with strong defence, two great runs and even managing not to demolish any of his team mates in the process.

Step up the 'Jacks'! Two great tries from the monster that is Jack T, a score for 'The Human Washing Machine' Jack A and 3 more conversions, including another from the touchline for Jack M nullified a Tarleton try to leave the score at 35-10.

The final 3rd saw a drop in intensity from the Dragons, allowing Tarleton to grab 2 more excellent tries but the final say went to Leigh with Jack M stepping to cross the line and Loui B expertly converting from wide also. Final score 42-22

A good start, plenty to work on but promising signs. Forwards showed signs of improvement in the scrum after a summer of guidance from 'Taff' which is much appreciated. The backs were slick, fast and strong and will cause chaos anywhere with ball in hand.

Special mentions to Jack M, a try and 5 goals including 2 from the touchline, Crusher Cleary for a stirring display and to Shandy Bass for getting three ladies phone numbers and a proposal of marriage! Game on Ron!!

Caldy at home on Sunday, keep up the good work.