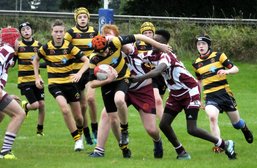 Guts, determination and a will to win from all!

There was an uneasy air about the Dragon’s side at the start of the day with several players carrying knocks into the first game. With numbers low it was looking like it might be an uphill task for the 15 who could make it for the first Cup encounter of the season against familiar opposition.

With the warm up out of the way and Team talk complete the Teams lined up ready for the off.

It was nip and tuck for the first 15 minutes of the game which saw Leigh exploit the width of the pitch only to see Crusher Cleary denied twice within a couple of feet of the line by the big opposition centre. The game was concentrated in the middle third of the field with neither Team wanting to yield first.

It was third time lucky however when play broke down on the left side of the pitch and with men over Leigh seized the opportunity for the overlap which saw the ball pass through forwards hands quickly and into the backs for Crusher to duck into the corner for Leigh’s first points of the day. Jack M tried in vain to add the extra 2 points from the touchline but a freak gust of wind blew the ball just past the right hand upright...

Leigh took the 5 – 0 lead into the half time break.

The second half began with the visitors coming out of the blocks like a diesel powered 125 making good use of their big runners making quick yards making the Dragons work really hard in their own half. Ultimately though it proved too much for the home side with Rochdale running in a try and kicking the extra’s 5-7.

Leigh kicked off and an immediate mistake from the visitors saw Leigh capitalise on the confusion with several phases of unbroken play. Play moved from left to right with great ball control and support from each one of the lads. The pressure saw the visitors kicking to relieve the pressure which Leigh dealt with reasonably well until a breakdown in centre field and a penalty to Leigh gifted the Dragons with an opportunity to catch the visitors off guard by making good ground and settling the ball up for Dan T to run in Leigh’s second of the day which Jack M duly converted to make the score 12 – 7.

It wasn’t long then before Ethan W ran in another great effort under the sticks with fantastic support from Crusher C and Ben T in the centres with forwards backing up just in case. Jack M converted to make the score 19-7 with almost 7 minutes to go. The game wasn’t over yet with more hard work to do in defence.

Rochdale piled on the pressure and worked their way up the field and were awarded a penalty 10 meters from the Leigh line. It wasn’t difficult to work out what the visitors had planned and they executed with drastic effect and barrelled over the line to make the score 19-12 with the last kick of the game.

The result wasn’t a bad reflection on the game. Both sides were committed and played with great skill both with ball in hand and at the breakdown.

However Leigh’s strength today was their desire and Team spirit, mixed with a good dose of skill. Each player supported the ball runner with good sharp rucking and several turnovers saw Leigh get the line share of the decisions on the day. The Team spirit of the lads, their work rate and commitment to supporting each other is something that shines through and makes us massively proud as coaches and parents.

A brilliant performance from the whole Team, their work rate was phenomenal and they never stopped working for each other.