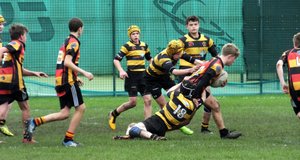 Leigh Dragons U15's held on to their 100% record after a monumental battle away at Heaton Moor, despite missing key players Danny E, Jack T Fabian W and Joe M.

The Taylor Tours minibus arrived on time with Shandy Senior and Junior in the back once more. Next week big John has agreed to pick up Gary 'Dogger' Walley to complete the set.

Big Ron, sporting his new Phyllis Pearce blue rinse and matching rug, looked resplendent. Gaz Mon was down in the dumps as he realised clicking his fingers didn't get him a coffee at Heaton Moor and that no-one knew who he was.

The game itself was always going to be tough, HM were semi-finalists in last years Lancs Cup and have several district players in the team.

Leigh started strongly and bossed the opening stages, only some strict and strange refereeing decisions kept Leigh at bay.
Eventually Leigh managed to break out with Tom Burns flying down the wing to finish a smart move in the left corner. What happened next was baffling! Jack M, struggling to tee the ball up in the long grass and strong wind was denied the chance to kick the goal with the referee saying time had lapsed. Fair enough in the 6 Nations but not for an U15's friendly on a Sunday morning. 0-5

Next up was Tyler B, who has added the extra dimension of blistering speed to the second row, scorched in again down the left. 0-10

More mind boggling decisions from the man in the middle allowed HM to gain a foothold in the match, leading to them to scoring just before the break. Half time 5-10.

Leigh started the second half strongly and were in full control. Strong carries from Duran W and the outstanding Dan T put Leigh in good field position from where the equally brilliant Ben C, beat several men and strode under the posts. Jack M converting, 5-17.

But HM are a good side and wouldn't go away. 2 Tries in quick succession levelled the scores at 17 all and it was game on.

The referee called 3 minutes to go with HM camped in Leigh's half, and a quick shift right allowed time and space for the lightning quick winger to seemingly win the game and break Leigh's hearts. 22-17.

But this team is made of strong stuff. The restart was knocked into touch by HM and from the line-out Leigh shifted the ball left, with Leon M tackled in centre field. Fin T fed Jack M flashing back to the blind where he crabbed sideways looking for a sliver of a gap. The gap appeared and he was gone, stepping the full back and going in under the posts, reminiscent of his Dad's wonder try for Salford in the 1996 Challenge Cup v Wigan. With Jack converting his own try the game was done and the lads walked off to the loudest cheers heard in a long time from parents.

HM gave their all and added to an excellent game. But this Leigh team is full of confidence. To be 5 from 5 with three of those wins against Group A rivals is a huge achievement.

Special mentions to everyone for a great start to the season but especially Dan T this week who was immense in both attack and defence and to Ben C who must be the best U14's player anywhere.

Knutsford at home this week, an unknown quantity so keep working hard fellas.