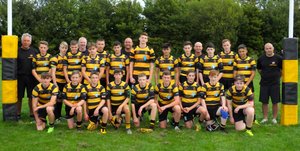 U15's in a dogfight in the mud

Leigh U15's welcomed Knutsford to Round Ash Park for the first time in what turned out to be a bruising encounter in atrocious conditions.

Leigh were stretched to the limit, missing Danny E, Joe M, Jack T, Fin T and Fabian W and with Ben T, Leon M and Ethan W playing with injuries and Ben C and Loui B playing straight after a RL game, it was always going to be a tough day.

Under the watchful eye of new head coach Shandy Bass, sporting his new club attire, Leigh's dressing room looked like a scene from Holby City with bandages and creams being applied everywhere you looked.

The game itself started with Knutsford on the front foot, dominating possession for the opening 20 minutes. Relentless pressure was applied to the Leigh line but time and time again they repelled the efforts of the visitors with probably the best sustained defensive effort seen from this team in a long time. During this, Leigh's injuries woes worsened when they lost Ikey H to a bad cut to his hand and Ethan W succumbed to his shoulder problem, injuries which both would bravely return from later.

Leigh got their reward with their first venture into the Knutsford half with a flowing backs move to the left being finished off by the impressive Loui B. 5-0

The game then became scrappy, which would last throughout. Leigh showed glimpses of form but were wasteful with the ball and were being counter rucked regularly. Oli N showed up well with numerous carries and strong defence to cap an impressive first half display.

As half time neared Knutsford again gained the upper hand and eventually crossed for a barge over try. Half time 5-5.

Leigh started much more positively in the second half and despite still losing ball at the break down, they carved out several chances which they couldn't finish. Eventually the next score came after a devastating run from Duran W, proving unstoppable on his way to the line. Jack M managing the conversion for 12-5 but becoming yet another casualty, hobbling around on a recurring knee injury for the remainder of the game

More chances went begging which Leigh would rue and as the clocked ticked down and with the lads tiring Knutsford came with one last all out push. With 2 minutes to go Leigh were desperately defending their line and seemed to have nullified yet another forward drive but a smart spin off the back of the ruck opened up the defence and Knutsford touched down at the side of the posts. With the conversion successful the game was done at 12-12, a fair result.

Although the 100% record has gone the boys are still unbeaten from 6 games and despite the initial disappointment, on reflection it was an excellent result considering the circumstances. Not the best performance but a massive amount of guts shown by all.

Oli N had his best game of the season so far, as did Ryan C who was everywhere with Dan T leading by example as ever. Tom B was outstanding defensively out wide and a threat with ball in hand.

LSH away this week, lets keep this run going.