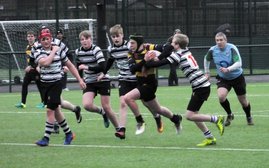 Spirited Dragons come close against Wigan in the Cup

Discipline, aggression and ability to adapt were outstanding, but Wigan capitalise during a 10 minute Leigh lapse

The Dragons had trained well and were gearing up for a hard game on a cold, Sunday morning at LSV against a Wigan side that were unbeaten in the cup. The visitors arrived full of confidence with their recent cup run and record against the Dragons suggesting it was going to be a tough day at the office for the Dragons. However this had been the first time in years Wigan had visited Leigh and they were in for a shock.

The referee had completed his preliminaries with the cold North Easterly wind blowing and with the brilliant support of the Dragons friends and relatives and the talisman that has become Shandy BA Taylor the Dragons started really well.

It was clear from the first contact that both sides weren’t going to give any quarter and it was nip and tuck in the middle of the field for the first 10 minutes with the Dragons comfortably in control of the ruck and keeping their discipline in the forwards to provide a platform for the back line to strike. Slowly working down the pitch the Dragons worked some good field position and put the Wigan line under pressure on six occasions only having to defend in their own 22 twice.

So with Wigan kicking from deep inside their own 22 and 5 minutes to half time young Louie B collected the ball on the 10m meter line and ran the ball back to the advancing visitors. His vision was outstanding and mixing up the play he spotted the gap in behind the fullback and the chase was on and Duran touching down in the corner. Unable to add the two from out on the touchline the Dragons went into half time with a 5-0 lead.

After the referee had dealt with Wigan’s enquiries about the penalty count in the first half it was time to get underway again.

The Dragons started sharply again and advanced down the field starting the second half the way they finished the first. The momentum was with them and it looked like the visitors were going to be another score down.

Then from nowhere an intercepted pass saw the visitors travel the full length of the pitch to score under the sticks and adding the 2 points they took the lead 5-7.

This then saw a spell of three more long range tries by Wigan after defending in their own 22 to make it 5-28 after the Dragons had seemingly done all of the hard work. Something we can definitely work on!

The indiscipline of the Wigan side saw them penalised time and again which obviously rubbed off on the coaching staff, in particular their team first aider/doctor/coach but unfortunately the Leigh side couldn’t capitalise until after the visitors fourth try.

Whilst receiving some barracking from the visitors on the side lines Leigh kicked off, the ball was expertly taken by big Jack T and a sublime off load to J Murphy saw him crash down the side-line to touchdown in the corner, a well-deserved try for the home side. Again the influence of the hot air coming from the side-lines saw the ball fly high from the conversion attempt only to see it pull wide, but a fantastic effort again by J Martin.

With the game almost done and the snow falling both teams put on a good display of attack and defence, typically aggressive defensive work from Wigan was matched (with discipline) from the home side resulting in the final stages of the game being played out with no more scores.

It has to be said that the Lads perseverance under pressure when trailing on the score board shows the spirit of the Team which is outstanding.

Throughout the whole squad their discipline, aggression, ability to adapt, structure and invention was brilliant to see. Some of the work we’re doing in training is obviously paying off.

We’ve also seen that when we protect the ball we can control the game.