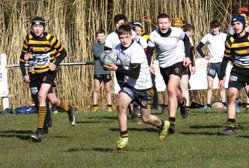 Dragons Through To The Next Round

Leigh Dragons hosted Orrell in the quarter final of the Lancashire Cup at a very cold and frosty Roundash Park.

The visitors were full of confidence having not progressed this far in the competition before. For the Dragons on the other hand it was familiar territory having progressed to the knockout stages over the past five years, which is a mark of how successful the team has become and how much potential the players have...

With the pre-match warm up done and Shandy having filled his boots with the post match buffet already the lads were looking sharp. The ref decided it was time to limit the home advantage by asking the Dragons to turn their shirts inside out!

It was clear to see from the first contact that Orrell meant business with some crunching tackles in the first exchanges, however Leigh did the simple things really well and controlled the ruck through some good solid forwards play with support from the entire back line, halfs, centres, wingers and full back too. It was great to see the hard work in training paying off.

With the dragons controlling the ball and retaining their structure it wasn’t long then before Leigh crashed over the line after some really good interchanges between forwards and backs.

This remained the story for the majority of the first half and with Leigh 17 – 0 ahead with 5 minutes of the first half left the mistakes started to creep in. A drop in concentration levels from a kick-off following another Dragons try saw our lead narrowed to 17-7 at half time and it was time to remind the lads about discipline around our structure and getting back to controlling the ball. The message was Control the ball and don’t concede any more tries.

With the work in training around the scrum and line-out starting to help the Dragons retain the ball more it wasn’t long before the Dragons return to the same level of intensity in the second half with good ball control leading to the Dragons running in five more tries with great power and skill supported by some excellent forwards play.

Lots of interchanges ensured the whole squad was used and it was clear to see the benefit of having the whole team training together. It’s essential that we get as much time together as possible if we're wanting progress through to the final, which is well within the Teams capability. It’d be a great end to the season and a fitting tribute to the hard work from players and parents ahead of the Oz Tour in July.

Still lots of work to do on organisation, structure and decision-making in key areas of the field.

Thanks also to the ref for making it a decent game for both teams and supporters.