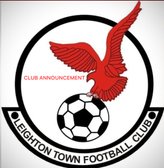 The club wishes to announce that first team captain Jordon Frederick has made the decision to join Berkhamsted Town.

Jordon has been an excellent servant to the club both on and off the field over the past few seasons but the opportunity to join a Step 4 club, currently sitting at the top of the Southern League Central Division, was too good to turn down. The club has always taken the view that players who move on to a higher level of football do so with our blessing and thanks. Jordon is a talented player and we are all disappointed to see him go but can take pride in the part we have played in his football development. We wish him every success in his new challenge at Berkhamsted Town.
Jordy has sent the following message to the Leighton faithful:
“Since the day I walked through the door you have been nothing but supportive towards me and have made me feel totally at home. We have enjoyed some great times together and have had some notable success along the way. I want to say thanks for your non-stop support through the good times I have had at the club. I was very proud and honoured to lead and captain this amazing football club and it is something I will always be grateful for. I feel it is now time for me to move on and take on a new challenge at a higher level of football. I wish you guys all the best and thanks for the memories.”
New signings arrive at Bell Close
The club is delighted to announce the signing of striker Leon Lobjoit who joins us from Eynesbury Rovers. Leon is a very talented striker with an excellent goals to games record and he will add real depth, experience and creativity to the ‘Reds’ forward line. Leon was a professional at Northampton Town and has had spells with a number of clubs including Nuneaton, St Neotts, Newport Pagnell and Corby. He will go straight into the squad for tomorrow night’s home fixture with London Colney. Leon will be joined at Bell Close by Sam Olawale who again joins us from Eynesbury Rovers. Sam has exceptional pace and will add another dimension to the Town attack. Sam has played for Newport Pagnell Town and Buckingham Athletic. He too joins the matchday squad for the visit of London Colney at Bell Close tomorrow night.
Share via
FacebookTwitter
https://www.pitchero.com/clubs
Recent news