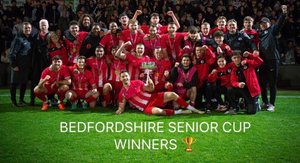 Leighton Town were crowned Bedfordshire Senior Cup champions following victory against Bedford Town in a pulsating final at Luton Town’s Kenilworth Road on Tuesday night, their first Senior Cup triumph since 1993!
A large crowd of 1080 people witnessed a thrilling game, finished off by Joe Fitzgerald’s emphatic final penalty, that sent the Leighton faithful into a frenzy of celebration.
This final started in frenetic fashion as Bedford took the lead early on through Lewis Miccio. He latched on to a fine cross from Joe Butterworth on the right, heading in off the left post.
Lee Bircham’s men came straight back at Bedford. It only took 3 minutes to equalise. Luke Pyman teamed up with Joe Fitzgerald – the latter putting the ball on a plate for the no. eight to head home past Alex Street in the Bedford goal.
On the 20-minute mark, things would get even better for Leighton as Duncan Culley doubled the lead. The imposing Welshman leaped the highest and nodded strongly into the right side of the goal. Keeper no chance.
Following a scrappy lull in the action and before the half was out – there was enough time for two big moments. First, Coulson saved brilliantly from close range on 40’. Then, five minutes later Bedford went down to 10 men as Charlie Sanders was dismissed for bringing down Culley as the last man.
The second half opened as Leighton looked to extend their lead. On 50’, Luke Pyman could’ve had his second but couldn’t quite pick out the bottom right following a one-on-one. Six minutes later, Duncan Culley would also come close – heading a floating ball just wide of the mark.
On 79 minutes, substitute Abu Khan was just wide. His low drive squirmed past the left upright. As fans kept glancing at the clock on the Oak Road stand, Leighton looked to see this one out. Alas, the referee signalled for seven additional minutes.
To their credit, despite their fixture pile up Bedford seemed to have a second wind and got a crucial goal on 97’ through Rory McAuley to take it to penalties. The tension was palpable, but Leighton managed to continue their love for penalties in this competition.
It worked out against Luton, now it worked out against Bedford. A spectacular save by Reds keeper Coulson and a series of superbly executed penalties by Adams, Turner, Campbell and Bryant, left Fitzgerald with the chance to secure the win which he did with aplomb, smashing home heroically. The win was sealed with a trademark knee slide in front of the delighted fans. 3-5 was the final score on penalties at Kenilworth Road and it was some way for Town to end their season.