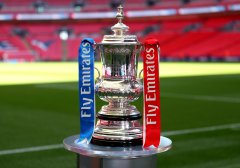 Leiston begin their FA Cup campaign of 2019/2020 at Ware. The Hertfordshire based side defeated FC Romania 2-1 on Tuesday in a Preliminary Round Replay. Stuart Boardley will have Kyle Hammond, Harry Knights, Ryan Sharman and Will Davies all out injured for the tie but Matt Blake returns to the squad after a groin injury. However, Ollie Saunders, George Forrest and Quevin Castro have all been signed on loan the past couple of days to help boost the squad.

Ware play in the BetVictor Isthmian League South Central and currently sit in 9th place. They have won 1 and drawn 3 matches in the league and are unbeaten still. They possess strikers Oluwasean Akinsanya and Liam Hope in attack. Both players have netted a few goals already this season.

Leiston and Ware have met competitively just twice. That came in the 2011/2012 season when the Blues won promotion to Step 3 at the first attempt after their first season at Step 4. The Blues played at Ware on Saturday 1st October 2011 with Michael Brothers on target in a 1-0 win. They played each other back at Victory Road in the return fixture on Saturday 7th January 2012, with the game ending 1-1. Gareth Heath netted an early penalty but late on Ware levelled to leave with a point.

This is Leiston’s 69th match in the FA Cup. They first entered the competition in the 1945-46 season and recieved a bye in the 2nd Qualifying Round and faced Lowestoft Town in the next round. After drawing 2-2, Lowestoft were disqualified and Leiston were drawn away at Chelmsford City in the 4th Qualifying Round but lost 9-0. Leiston got some good results in the next few years but took a hammering in 1955, losing 14-1 at Sudbury Town. Between 1958 and 2003 they didn’t play in the FA Cup but returned in the Extra Preliminary Round in 2004, beating Felixstowe & Walton United 4-1 in a Replay at home after drawing 1-1 away before losing to Tilbury 2-0 in the next round. Leiston then had their memorable cup run in 2008, playing 9 matches in total, before bowing out to Fleetwood Town away from home. Just two seasons later they reached the 4th Qualifying Round but lost in a Replay to Dartford. In 2016, Westfields defeated the Blues 2-1 in the 4th Qualifying Round.

It’s not only the first team in action tomorrow as the Reserves host Framlingham Town at the Watson & Hillhouse Victory Road Stadium in the Thurlow Nunn League First Division North. Kick off is at 3 o’clock.

The ‘A’ game has been postponed against Elmswell Reserves this afternoon.