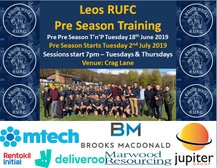 Head Coach Paul Gabriel has outlined his plans for pre season ahead of the 2019/20 season.

Leos will begin training again on 18th June 2019 with 2 weeks of touch and pass to get everyone back into the flow of rugby training again ahead of the 8 week pre season block starting on 2nd July 2019. Sessions will run on Tuesdays and Thursdays from next week starting promptly at 7pm down at the club (Crag Lane, LS17 5PR).

Having secured promotion at the end of the 2018/19 season on the back of 18 consecutive league victories Leos will be looking to build on the momentum gained ahead of their inaugural season in Yorkshire 1.

As Leos step up to level 7 for the first time the club are on the look out for players to compliment and strengthen the current senior squad. You may be currently playing elsewhere or playing rugby league but fancy giving Leos a go, you'd be more than welcome down over the next couple of weeks and throughout the season.

Pre Season is open to all players across the senior sides and the coaching team will be looking to improve individuals as players, as well as putting in place the building blocks ahead of the the 2019/20 season.

A pre season fixture has been arranged against Leeds Modernians for Saturday 17th August 2019 at Leos, while Coach Paul Gabriel is looking to secure another fixture ahead of the new season.