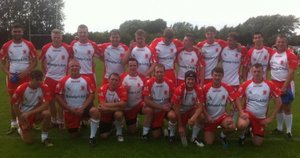 A frustrating result from a game which Leyland played some great rugby but fell short to a couple of individual tries.

A well contested opening 20 minutes saw the game remain scoreless with both sides trying to gain control and Leyland appeared to have opened the scoring through Bailey Locke but the try was ruled out. The Warriors did score first, when a shift to the left saw Dan Horridge bat the ball on under pressure to Cory Bennie, who drew and passed to Nathan Burns, who squeezed in at the corner.

St Judes replied immediately when the Warriors failed to deal with the restart and then they extended their lead when they shifted the ball wide to their extremely large and speedy winger, who broke a tackle and raced 70 metres to score. Leyland had a period of disarray when a clash of heads between two Warriors caused some disruption and a major reshuffle but they soon recovered.

Billy Bishop then produced the tackle of the game, enveloping a Judes player one-on-one and slamming him to the floor forcing an error. He recovered possession and offloaded to Locke, who raced under the posts and converted his own try.

In the dying moments of the half, Leyland were awarded a penalty to the right of the posts about 30 metres out and with seconds remaining Locke slotted home the goal to make it 12-12 at half-time.

Annoyingly, the only try for the first half hour of the second period was when the ball was shifted to the Judes' winger who again showed an amazing turn of pace to score an 80 metre try more reminiscent of an U8s match, as nobody could lay a hand to him, 18-12.

With 10 minutes remaining, Leyland pulled themselves back into the match when a nother good left right shift saw Bennie get outside his marker and feed Burns, who turned his opposite winger inside out for a superb finish, 18-16. Further disruption then occurred for the Warriors when Rob Harvey was forced from the field with a badly broken collar bone.

Leyland through everything at the hosts in the final minutes but in their desperation to score, an error led to Judes adding a final try to pull away to 24-16 in what had been a very tight contest. A solid performance from Leyland, undone by two individual tries and the Warriors will be hoping for another good display when they travel to Rochdale Cobras in the cup next week.