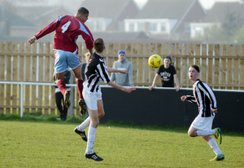 TOM COUPE SCORES WITH ANOTHER HEADER

Tiredness was always going to be a big factor in this game.

Linbys 3rd game in 6 days , plus the fact FOUR players , Mason Frizelle, Joe Butler, Ruban Mitchell and Adam Fox had all played in the ENGLISH COLLEGES Semi Final, at Gateshead, on Wednesday .
( Butler got both goals in a 5-2 defeat< Bilboros second Semi Final defeat in 2 years ).

Going behind from an early penalty, Linby equalised on half time, with a flying header from Tom Coupe, from an excellent Matt Peberday free kick.

Peberday was superb in centre mid, but Linby found Swans keeper Richard Fenn in outstanding form, making a string of excellent saves.
The home side got he winner on 80 mins.

But good positves for Linby were the return of Mark Jago, another solid display from the skipper Terry Henshaw, and Peberdays role in the game.
And the fact there was FIVE 18 year olds in the starting line up .