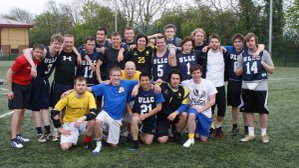 Lincoln contested another mid-table away fixture with a depleted 10 men. Notably, Lincoln fielded one longstick in vice-captain Sam Smith, and Lincoln University fresher Paddy Sheehan made his first appearance as goaltender in NEMLA. Returning to the lineup this week however was attackman Sam Cave, midfielder Martin Sherwin and making his first appearance in midfield for 2014/15 is Jon Stamper after a sabbatical between the pipes.

Despite lacking in legs, Lincoln were able to notch their first ever victory in Ashton, winning 7-9 behind a 4-0 run in the first quarter, 4 goals from hot-handed Jake Stenhouse and 4 points from captain Dan Jones. Ashton threatened with comebacks with a 3 goal streak in the second quarter and a late comeback in the fourth, but Lincoln held on to the ball and the scoreline to bring home the win.

Lincoln shooting vs Ashton zone
In 2014 at home, Lincoln struggled to break down a stingy Ashton defence, settling for low percentage looks and shooting poorly on a strong goaltender. In Manchester - having drawn up a few zone busting plays - they started the game in stark contrast, were patient on offence and shooting at 80% in the first quarter (4/5). Although Lincoln became more impatient and inefficient from the second quarter, the shooters were hot, and the tender was not.

Defending with 5 shorties
One cause for concern heading into the game was how Lincoln would fare with just one pole. Led by a man-of-the-match performance from SSDM specialist Christopher Ng, the boys in blue were patient, and coped well against an offence more likely to feed than dodge.

Tempo
With a patient offence and packed zone, Ashton favour a slower tempo, and despite having no subs on the sidelines, Lincoln were keen to run and gun in transition on a small pitch. Thanks to composed outlet passing from debutant Paddy Sheehan, and hustle from the midfield, Lincoln were able to exploit a number of fast and slow break goals before Ashton settled into a zone.

Face-offs and possession
You can't score if you don't have the ball. Lincoln's performance was spearheaded by Aiden Jakubik's domination at the X. With strong wing play to boot, the Yellowbellies won well over 50% of draws, depriving Ashton of the ball for almost all of the first quarter and in crucial moments during the fourth quarter.

Man of the match: Christopher Ng

Next weekend Lincoln cross the Humber bridge for a season-defining, season-closing fixture against close rivals, Hull.