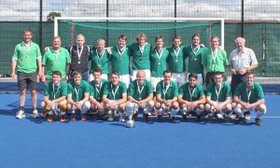 Lincolnshire cruise through to Finals Day at Nottingham on 1st June

Lincolnshire annihilated all opposition in the England Hockey County Championship Pool 2 at The Lindum, Lincoln last weekend, winning all four of their games decisively. On Saturday a depleted Surrey side were no match for Lincs in the opening game of the tournament and the local county side won in a canter 15 – 0. A harder game verses Kent in the afternoon saw the visitors take an early lead when a clear kick of the ball was not spotted and Lincs found themselves 0 – 1 down. Taking full control of the game after 15 minutes Lincolnshire went on to win comfortably 4 – 1 playing by far the best hockey. On Sunday their first game was against joint leaders Sussex who soon became no match for Lincs, despite Overton in the Lincs’s goal being called upon to produce a couple of early saves, 4 – 0 being the final deserving score to Lincolnshire. In the final match of the tournament Lincs faced a struggling Somerset who basically had to beat the hosts by six clear goals to gain a second place instead of Kent. Lincolnshire quickly put pay to any chances by scoring two goals in the first 19 minutes then securing an effortless 6 – 0 win. There were great performances from all the players, but particularly local Lindum player Sam Temple-Baxter, who excelled in the defence in every game. The team now goes to the Nottingham Hockey Centre (home of Beeston HC) on 1st June to play Yorkshire in the morning semi-final and hopefully getting through to the Final in the afternoon.