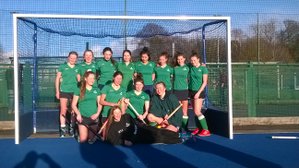 A frustrating day as we only showed in fits and starts what we know we are capable of.

An unusually good start saw Lincs hold one of the tournament favourites Cambridge to 0-0 until the last 2 minutes when they scored twice in quick succession to take the game 2-0; a disappointing result as the girls had battled hard and though Cambs had by far the better chances, Lincs defended well as a team and a it would have been hard to begrudge them a point had they managed to hang on for those final moments.

Buoyed by an impressive team performance in the opener, Lincs were soon brought back to Earth with a bang; Essex smashing 5 past them in a 5-1 mauling brightened only by Grace Hodgett getting the team’s first goal of the day following great attacking play from Sophie.

Whenever the coaching team has asked for a response from this group of girls, they have always delivered, and this time it was Herts who felt the repercussions as Lincs set about their 3rd game with energy and aggression. Ciara and Jess in the middle were midfield dynamos, hunting every loose ball, tackling and feeding the ever running Callie who was unlucky not to get on the scoresheet herself in a fantastic performance. Jess finally put the ball away following great pressing from the forwards and the back line of Orissa, Helene, Macy and Abbie ran their socks off and put their bodies on the line time and again alongside Rose in goal to register the clean sheet and a 1-0 win.

From the sublime to the ridiculous just about sums up the next game. Norfolk took the lead within 5 minutes when a poor clearance fell to a Norfolk forward who was adjudged to be clean through on goal until Orissa hooked her stick! Rose guessed the right way on the resulting penalty flick but there was too much pace on it and her dive was to no avail. All this in gorgeous sunshine as we headed towards the 5 minute mark, when seemingly out of nowhere came a hailstorm of biblical proportions! Within seconds the pitch was covered in a layer of huge hail stones and the umpires temporarily abandoned the game, sending the girls scuttling for cover. Cue 20 minutes of snow angels, snowball fights, football and the consumption of huge amounts of chocolate cake before the game resumed and it seemed for much of the following 20 minutes that only one team had reappeared after the restart as Norfolk smashed a further 5 unanswered goals past a beleaguered Lincs side to take the game 6-0.

The only positive to take from the previous game was that at least the girls had one more game to put things right. Suffolk were destroying all before them and unfortunately were again too strong for Lincs who despite a 3-0 loss at least showed a response once more and forced Suffolk to work hard for their goals. Angel, Katie and Ciara worked tirelessly in the middle, while Eleanor, Callie and Sophie battled for everything upfront. However it was the backline who saw most of the ball, Macy and Abi charging down penalty corner after penalty corner while Helene and Orissa stood firm at full back making some great tackles and interceptions.

I am sure I can speak for both Rob and Amy as well as myself when I say that as a group these girls have been a pleasure to coach. They may not have come away from their finals day with any medals or trophies, but they have done their clubs and their county proud throughout the year. Thanks as always to all the parents and other adults for their continued support in getting the girls to training and matches and for supporting from the sideline in all weathers!

To those girls who are too old for next year’s campaign we wish you all the best in your future hockey endeavours, for those still with us next year, enjoy some time off and we will look forward to seeing you in September
Brewer