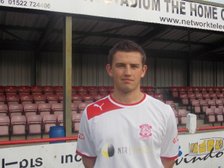 BOWDEN AND CARCHEDI SET FOR RETURN

United hope to have Gio Carchedi and Josh Bowden available for selection against Loughborough Dynamo on Saturday following three weeks out of the side.

There might be an added bonus of Stuart Reddington, he couldn't train on Thursday night as the gym floor would have done his injury no favours.

However he came through Tuesday's session with no problems.

It has been very frustrating so far this campaign but his mere presence would be a huge boost particularly with Sean Wright out for two games.

With all the injuries and unavailability this season the Whites have only two ever-present players and they are both missing tomorrow, although it is their own fault, Brooks and Wright.