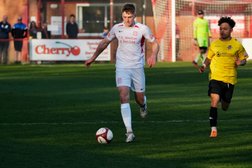 After an intense end to the season and United securing Northern Premier League safety on the final day of the campaign, all at Lincoln United Football Club would like to place on record our thanks to young Imps star, Hayden Cann.

Cann joined 'The Whites' on an initial month-long loan in January, making his debut away at play-off semi-finalists, Stockton Town. After an impressive start to his loan, including a commanding display in centre-midfield during a 3-2 win over North East club, Dunston, United extended his stay until the end of the season.

The final two months of the season saw Cann make nine consecutive starts at the heart of United's defence, forming a fantastic partnership with fellow centre-back, Callum Foster. Cann was an integral part of United's run-in, ensuring 'The Whites' were more defensively solid - thus seeing United finish 3rd in the form guide [based upon last 6 games].

The young defender put in fantastic performances against Pontefract Collieries and Stocksbridge Park Steels, both matches resulting in consecutive clean sheets for 'The Whites' - the latter, United having been down to 10-men for 45 minutes. The young professional put in more consistent displays in the final three matches, supporting the team to win three matches on the bounce; a feat not achieved since 2017/18.

It's been clear for all to see that Cann has a bright future ahead and all at Lincoln United Football Club would like to place on record, our sincerest thanks for his professionalism and commitment throughout his loan, as well as our best wishes for a future.