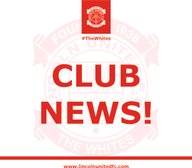 To many of Lincoln United's faithful, the name Churcher might ring a bell with Lincoln United women's returning top-scorer, Lauren, being the daughter of the ever present club kit-man, Steve.

The club's exec-board and women's management team are delighted to announce the return of Lauren Churcher, an extremely important signing for 'The Whites.

Having been at Lincoln Moorlands Railway for eight years prior to the 2019/20 season, quite often being the match winner, Churcher decided it was time to move to Hykeham Town women's team. The 2019/20 season saw her accrue 14 goals and 10 assists in nine league game for Hykeham; a truly impressive feat which saw her finish as the team's top-scorer and the league's second top-scorer, a tally which would have undoubtedly been added to with the remaining eight league games, prior to the season being cut short.

The team's returning striker, Churcher, had this to say on her agreeing to sign for 'The Whites', "I'm really excited to be signing for Lincoln United in for the forthcoming season, I can't wait to get back going again, when it's safe to do so. There's been so much effort being put into making the club a success off the pitch, I can't wait to play my part on it and help the team win the league which will be our main aim next season. Also, my Dad has been involved at Lincoln United for 12 years or so and for me to now be representing the club's women's team is a huge honour and a nice connection for our family."

Women's team manager, Chris Funnell, commented on Churcher's return, "I'm truly delighted that Lauren has agreed to return to the team for next season. To contribute 24 times in nine league games is seriously impressive; two hat-tricks against Arnold Eagles and Notts County respectively, as well as a very important brace against Chesterfield Women. Lauren's ability both on and off the ball makes her on the best players in this league and the one above, in my opinion. Having chased Lauren for two summers, to finally get her to sign at the start of last season was pleasing, having her commit again is fantastic. I know when we return she'll be able to continue make a significant difference on the pitch."

As with any adult player at the club, men's and women's, Lauren is available for sponsorship, amongst many women's team packages, as can be seen in the commercial brochure below.