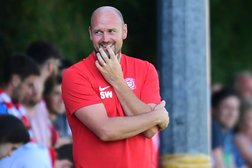 After another week full of activity off the pitch, men's first team manager, Sam Wilkinson, has been busy bolstering his squad ahead of an important second half of the season.

It was confirmed this week that after 8 matches, which has seen 'The Whites' pick-up 8 points, Kern Miller has left Lincoln United Football Club. Miller made 7 appearances in 8 matches and was a key figure throughout November and early December, supporting Wilkinson's side to deliver a 3 match unbeaten run which included United's brilliant 1-0 win over Worksop Town at Ashby Avenue.

Defenders and keeping them fit has been a bug-bare for Wilkinson and his coaching staff throughout this season, as Freddie Pitts, last week's Mansfield Town loanee debutant, is now injured with a calve strain, having to be withdrawn from action during last week's match against Bridlington Town.

As such, Lincoln United Football Club, are delighted to announce the loan signings of Lincoln City youngsters, Hayden Cann and Robert Deane. Both players are defenders, with Cann also able to play in a central midfield role.

Cann, last October, signed a 3-year professional contract with 'The Imps', whilst also coming with Northern Premier League experience having spent some time at fellow Lincolnshire NPL club, Gainsborough Trinity. Deane is still within his 2-year scholarship at the league one club, both players will quality and much needed depth into United's defence ranks.

Wilkinson had this to say on his new signings, "Having seen both players train this week, as well as having regular communication with Lincoln City, I know both players are going to be huge assets to us. Hayden's a 'proper' player, good stature about him, calm and collected on the football, as well as having the know-how to defend. Bobby, similar, not as old or as experienced as Hayden, but really impressive within training this week and we're looking forward to seeing the quality the pair can add to our squad.

We've got at least 5 defenders out injured at present, including Freddie, who I thought did really well last week, especially second half and so Hayden and Bobby are going to be key signings for us as we head into a challenging month end".

Director of Football, Chris Funnell, gave his views on United's new signings. "As those that have seen us this year, defenders staying fit and the ability to find a back-line that doesn't consist of several changes every week has presented its challenges, so I'm delighted that we've managed to secure Hayden and Bobby on loan.

On behalf of Lincoln United Football Club, I'd like to extend our thanks to Lincoln City FC who have supported us to make this happen and furthermore, quickly to ensure both players are available for Sam and the team this weekend. This type of partnership working is exactly the sort of relationship we aspire to have with our professional neighbours and something I hope we can continue to grow for the benefit of both clubs in the future".

Next: Stockton Town (A), 15:00 KO - for details on coach travel, please contact one of the club's social media pages.