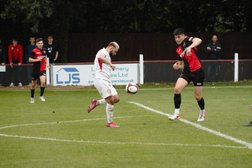 Lincoln United Football Club can confirm that George Asplin is no longer part of the Men's First Team and has consequently left the football club.

Over the two seasons, Asplin made 18 appearances and scored two goals. Albeit the first season was curtailed by Covid-19.