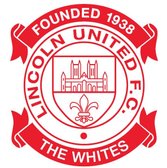 Over the last few weeks Lincoln United have suffered some financial blows which, without going into details which may embarrass those concerned, means that some elements of expected income into the club will not now be forthcoming. This has of course impacted on how the club is run and more especially how the playing squad is funded.

The Executive Board, manager Steve Housham, assistant manager Nathan Jarman, and the players have all met and have agreed a way forward. Club officials will continue work hard to run the club sustainably and seek new investment. The playing staff are determined to battle away to gain the points that will maintain the club’s Northern Premier League status.

We implore everyone who supports the Whites and who enjoys their visits to the Sun Hat Villas Stadium to back the club in the challenge the second half of this season will bring. A great start would be to attend our Boxing Day game against Worksop Town so that we have a big gate and brilliant vocal support.

We ask that anyone who is interested and able to offer any form of support including sponsorship of players, matches, areas around the ground, etc or any other form of donation to get in touch with lincolnunited.commercial@gmail.com

The football world has its up and downs and it’s Lincoln United’s turn to struggle at the moment. With the tireless work of those at the club on and off the pitch and with the help of anyone who’s prepared to offer it we can get through this and look forward to further rebuilding in the close season ready for 2020-21.