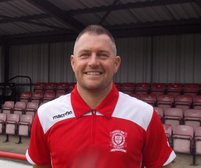 PROGRESS HAS BEEN MADE

After recovering from Saturday's trip to Leek I've had time to digest and reflect on the season just gone by.

When I sat down with my chairman in pre-season we set out to improve on last season's 17th position in the league table and rectify our poor disciplinary record.

I knew it would be a tough ask as we basically had to rebuild the majority of the squad and get them to buy into our principles.

What was evident was that with a few minor tweaks here and there the players had bought in to it with ease and we we're going ahead of schedule come October.

We sensed a real togetherness within the group and we went on our best run for a number of years, Two separate ten unbeaten games gave us an outside chance of the play-offs and brought the feel good factor back to Ashby Avenue.

We were also in the top five of the National Fair Play league.

We then hit a brick wall after the Gresley game at home in early March when they beat us 3-1. The players that day had given us everything but Gresley had the rub of the green plus an outstanding performance from there on loan Walsall keeper and gone were our play-off dreams.
We also picked up silly frustrating bookings which effected our top five place in the fair play chart.

We were on course for our target but didn't want the season to finish how it had started.
However one noticeable trait of this talented squad is that they've bounced back well from adversity.

We picked up a good point against Newcastle Town at home and narrowly lost 3-2 to worthy champions Mickleover Sports then to finish off we picked up a fantastic away win at play-off finalists Leek Town 2-0.
We also received the fair play award for March and received prize money for our efforts. We also had two players finish up in the Evo Stick league top goal scoring charts and finished with the highest points tally for 11 years.

We also embraced Brendan Mcdaid's final games at Lincoln United FC,a fantastic career coming to an end which I doubt we will see ever again.

We also have been blessed this season with some of the best supporters in the league backed by a fantastic board,volunteers and backroom staff.

With two or three quality additions I'm hopeful of another season of progression.

See you all in August.