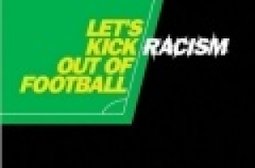 LET'S KICK IT OUT

As part of the FA Kick It Out week and in conjunction with Lincolnshire Football Association, Lincoln United Kicking It Out on Tuesday night.

The Evo-Stik League game against Coalville Town will see United support the FA campaing against Racism.

Players will wear the Tee shirts before the game and Lincolnshire FA officials will be on duty to raise focus into an issue that still turns up in football.

We took part in a similar event last year along with Positive Futures and in a massive coincidence that game followed John Terry's rant at Anton Ferdinand.

Now this one follows the ugly scenes in the England Under 21 game in Serbia.