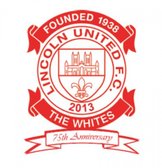 Lincoln United are planning something special in this year’s 75th Anniversary season.

They are going to honour Fred Green, who died six years’ ago aged 72, in appreciation of his four decades as Manager from the 1960s to the 1990s.

During his time in charge, Fred took charge of over 1.000 matches and led United from the amateur Lincolnshire League to the semi professional Central Midland League.

On Sunday, ex Whites’ keeper, Tim Crosby (50) completed the Mablethorpe marathon and raised £300 towards a memorial for ‘Mr Lincoln United’ as Fred was known.

Ex player, Manager and now Director of Football, Alan Crombie said, ‘ A group of players from the 1960s decided the club should honour their long serving manager with a memorial plaque displayed at The NTR Stadium. It will be a fitting tribute to a great man’