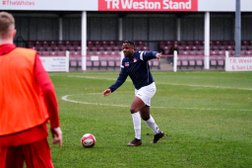 Lincoln United Football Club can confirm this afternoon that after a mutual discussion between player and manager, Chris Funnell, versatile defensive player, Sid Costa has left the club.

Costa has made 18 appearances in his two spells with the club and played a significant part in United staying in the Northern Premier League last season, a feat that won't be forgotten.

All at 'The Whites' wish Sid good luck for the future.