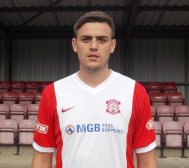 Preparing for next season - Scott Ruthven

As the management team begin to prepare for next season, they are delighted to confirm that . . .

Scott Ruthven has committed to Lincoln United for 2015/2016 Season.

This is fantastic news for the club as they look to build on a much improved team performance this season.

Scott has been ever present for the Whites this year upfront with Andy Hutchinson and his clinical finishing has ensured he has found the net 17 times this season. A near perfect first season with the United Squad.

If you would like to be the main player sponsor for Scott for the 2015/2016 season, which includes a signed football and photo, mention in each 2015/2016 programme and web content. Price is £75. Email Tristan@lincolnunited.co.uk for more details.

As Dave Frecklington begins to prepare for next season, stay tuned for further player news.