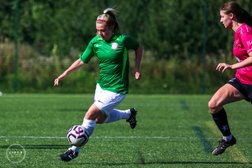 Lincoln United Football Club can today confirm that attacking trio: Amie Barnes-Ford, Holly Newman and Millie Seaton have left the club and consequently the women's first team for a variety of reasons.

Barnes-Ford and Seaton had been with the team since its inception five years ago, whilst striker, Holly Newman, joined the team towards the latter stages of 2018-19 season. Both wingers, Amie and Millie were unable to commit to a new season due to personal circumstances, whilst, Holly has taken the decision to retire.

Manager, Chris Funnell, had this to say on the departure of all three players. "I think the most important thing is to place on record my sincere thanks to all three players. Since taking over as manager three seasons ago, the players knew the goal was always to achieve promotion to 'Step 5', two covid hit seasons later and we've achieved our objective. That wouldn't have been possible without the contributions of these three players throughout their time at the club. It's the truth that every player has had an impact but the impact of these three has been significant, as you can see by the goal and appearance records.

We will sincerely miss all three, as aside from their ability on the pitch, they're all big personalities off it and have been integral to the group dynamic in the changing room. I wish all three the utmost success in their next chapters and we hope to see them at Ashby Avenue in the future cheering on the team".