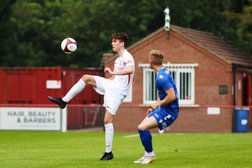 Four games into pre-season and after retaining a large percentage of his squad, Men's First Team Manager, Sam Wilkinson, has been busy bringing in new talent to add depth and strength to an already talented group.

A competitive defender who is also versatile enough to play in midfield. Archie has great quality going from back to front, whilst being very aggressive defensively. Archie's had a long lay off with a bad injury which has hampered him from playing as many games as he could have done at this level, at such a young age too.

Moyses has slotted into the squad perfectly. He has a fantastic attitude and fits into the club's ethos of being a young, local and hungry player.

A young shot-stopper with huge potential. 'The Whites' are really pleased Ellis has agreed to commit to the club, a keeper who has fantastic assets in both keeping the ball out the net and setting the team on the attack.

At over 6ft, Ellis has been playing locally within the pyramid for sometime now but never quite had the opportunity to progress to this level, despite being more than good enough.

An extremely promising young defender who has shown an incredible appetite and attitude since joining in pre-season. At just 18-years old, Jack is very good aerially, intelligent and technically gifted with the ball at his feet.

Wilkinson had this to say, "I've got high expectations for Jack. I see a player who loves to defend, whilst also being calm on the ball. If Jack can continue to develop as a player, we're going to have a fantastic centre-back on our hands, a real asset for the club".

After being on the sideline with a bad injury, now fully recovered, Lewis joins us having previously played at Lincoln Moorlands and Spalding United.

A very silky, calm and skilful attacking midfielder who plays with lots of energy, pace and technical quality. Continuing with the ethos of young local talent, Smith's creative quality will see him chip in with his fair amount of goals and assists.

Very much like the the signings before him, Lincoln United FC is delighted Tobias has committed to the club for the upcoming season. Sam and his staff had agreed to sign the young attacking midfielder last season but Covid stopped the season in its tracks.

A very exciting and young talent with great potential. Tobias has two fantastically quick feet and is able to break lines with a pass or dribble. In addition to his attacking assets, his defensive work rate gives him another string to his bow.

After losing Charlie Ward, Kyle Watkins, Nick Bates and Sid Costa this summer, Wilkinson has been working hard to ensure his squad is ready for the season opener. The gaffer had this to say on his signings, "All the five lads we've signed have unbelievable potential and more than that, have slotted into the squad and have shown they can play this level now. They also all fit the model that the club is looking to install, young and local players. We've got more signings in the pipeline in the coming days and I'm really pleased with where the squad is at present - the retained lads, the new lads coming in and the players coming back from injury, etc, we're in a good place".

All the new signings are available for sponsorship for the forthcoming 21-22 season, as outlined in our Commercial Brochure below.