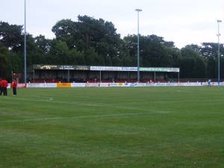 Lincoln United's Under 18 side produced some exhilarating football to overcome Blackstones in the Lincolnshire Intermediate Cup Semi-Final.

Ashby Avenue was the venue and 5-1 was the winning margin as United's Youths booked their place in the Cup Final.

Despite a sloppy twenty minutes straight after half-time when they let Blackstones back into the game they ran out worthy winners.

After the early exchanges United began to get on top and openings began to appear. Jack Nash gave United the lead bursting in from the left. More good work from Nash saw a visitng defender drawn into a challenge and an own goal doubled our lead.

Luke Shipman and Jake Park were causing major problems for the visitors and it was no surprise when Shipman made it three.

Blackstones must have been pleased to hear the half-time whistle because they were crumbling leading up to the break.

However, it was different straight after the re-start. A casual approach from the Whites led to more posession for the visitors which led to pressure which eventually led to a goal.

Then Michael Cooke, United's keeper produced two vital saves to keep the margin at two. The first a great save when the Blackstone's striker was clean through and the second a penalty save.

Both of those were made early enough in the half to have seen the visitors mount an unlikely comeback. Both were a result of United's casual approach after the interval.

Fortunately the penalty miss (save) lifted United and a piece of class from Park who turned sharply wide of the right hand posted and guided his shoy beyond everyone at the far post to clinch the game.