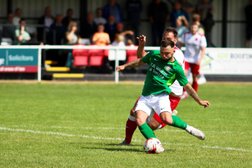 UNITED BACK FOR THE FIRST TIME SINCE OCTOBER 2020

For the first time in eight months 'The Whites' took to the pitch to take on newly promoted Skegness Town AFC.

United got off to bright start working three openings in the first six minutes. First, Robbie Smith took a snap-shot at goal but missed the target from 18-yards out. It was then the turn of Kallum Smith who drove in behind the Skegness defence but a good last ditch tackle thwarted any attempt on goal. Finally, on the sixth minute, Cotton and R.Smith worked a corner well, the former unleashing a venomous strike from the edge of the box but the Skegness keeper got a strong hand to keep the ball out.

Skegness started to grow into the game, Acar and King occupying United's defenders. Acar worked an opportunity and then turned down the chance to shoot, instead pulling the ball back and gifting the ball to Kallum Smith. The front two for 'The Lilywhites' then combined, this time it was King who should have done better, a deft ball to the back-post found King unmarked but he missed the target with his free header.

After another long-distance Skegness strike which struck the top-corner of the side netting, United took the lead. Millard set the press, forcing two defensive errors, the Skegness keeper scuffed the ball to the edge of the 18-yard box and Asplin was on hand to roll the ball into an empty net.

The game continued to ebb and flow and Skegness created the next two notable chances. King brought the ball down well but snatched at the ball, his shot rolling wide of the target. Kallum Smith then cleared one off the line after the Skegness centre-back headed the ball towards goal from a well delivered corner.

United had the last chance of the half. A long ball forward by Woolley cleared everyone and found George Asplin baring down on goal, a quick shift and shot looked destined for the far corner of the net but Lambley was equal to the quality of the strike and kept the score down to one heading into half-time.

Soon after half-time, 'The Whites' were caught out and in the 49th minute the ball was played in behind the back line and Jenk Acar made no mistake with finding the far corner of the net to draw Skegness level.

United quickly tried to take back their lead, Kallum Smith did well to intercept a pass before driving into the area and fizzing a ball across the face of goal for Janssen who couldn't direct his header on target.

As the game drew on, United made wholesale changes and Skegness took advantage of the break in play to take the lead. United called for offside but to no avail, the ball fell to Acar, six yards out and he slotted it past the keeper for the second time in the match.

Two minutes after the restart, R.Smith and Cotton were causing issues again. Smith found Cotton whose neat footwork saw him find an opening to shoot but his shot smashed off the foot of the post to bounce away and leave Skegness in the lead. It wasn't long before the same two combined to equalise for 'The Whites'.

In the 81st minute, Matt Cotton, beat the offside trap and brought the ball into box, looking around for options he played a ball across the six yard box to Robbie Smith who neatly placed the ball in the corner.

A really good opening pre-season friendly for United against a competitive Skegness Town side and, a special mention to the young under 18 players that made their first team debuts yesterday.

United are back in action next Saturday (3rd July) at home to Winterton Rangers, 3pm KO.