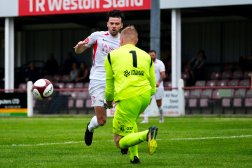 Three days after a defeat to Winterton Rangers, ‘The Whites’ took on another North Lincolnshire club, Bottesford Town.

The first 20 minutes ebbed and flowed with neither team creating any real threatening chances, until some neat build-up play saw Robbie Smith fire over from 18-yards; from then on, it was all United. Smith again threatened - a clever run found the attacker in behind and one-on-one with the Bottesford keeper, his initial shot was well saved but on the rebound, he rounded the keeper and squared the ball for Liversedge who tapped the ball into an empty net, only to be flagged offside.

In the 38th minute, Liversedge played in an incredible pass round the corner to Mcmenemy who released a hard left footed shot but the keeper was equal to it and palmed wide for a United corner. The resulting corner saw Cotton find Mcmenemy again, this time unmarked in the box but his turn and volley was well thwarted by the Bottesford keeper.

As time drifted on, United were starting to attack freely with passes from Baker and Foster always finding their target up the pitch and, Cotton was influencing the game more. It was the captain's slalom run that drew a tackle from the Bottesford centre-back but appeals for a penalty were waved away.

The second half continued in the same fashion as the first had finished, United on the attack. It was the familiar combination of Cotton and Smith who unlocked the Bottesford defence. Matt Cotton picking up the ball 20-yards out from goal dribbled past three defenders to square the ball to Robbie Smith who duly finished the ball into an open goal.

From the goal, United looked comfortable and had another penalty shout after Smith found himself at the byline and seemingly felt contact but the officials weren't moved.

As United rung the changes, Bottesford had two golden opportunities to equalise. First a defence splitting found Jack Cross one-on-one but good recovery defending and keeping kept United's sheet clean. The second chance fell on the 88th minute; a good turn on the edge of the box allowed the Bottesford attacker to pull the ball back to an on-running midfielder, but his shot was skewed wide and high, when it looked certain he would equalise for the North Lincolnshire side.