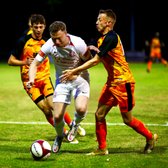 Lincoln United's 2022-23 pre-season schedule came to an end after losing 2-3 at home to Gainsborough Trinity who reside in the Northern Premier League, Premier Division.

As with any pre-season campaign within non-league, there were more changes due to unavailabilities; Cotton, Clarke, Liburd-Hines, Arbon and Costa were all unavailable.

The match made a relatively even start to proceedings with both teams having half-openings. However, it was Trinity who took the lead when United conceded their 4th penalty in six matches; Gainsborough's captain, Wright, duly tucked the ball away.

Again, both teams created some half-openings with Liversidge and Janssen having half chances for 'The Whites' but Trinity made the most of theirs and some slack defending from United. A home corner, seconds later ended up with Untied being 2-0 down; a quick counter-attack saw Trinity break and it was Wright again who glanced in the header in the middle of the six-yard box.

On 35 minutes the away-side made it three; direct from a corner, the ball snuck in at the near post.

United did get one back through a penalty of their own. Good pressing saw the ball end up at Janssen's feet with the Trinity defender adjudged to have fouled him. The young attacker stepped up and scored the penalty himself.

Before the break, United had one more half change through a corner-kick, whilst goalscorer, Andy Janssen received a yellow card for a late tackle.

The second half saw United change their defensive strategy however, within seven minutes of the restart, Andy Janssen was given a second yellow card and subsequently received his marching orders.

Trinity had more possession in deeper lying areas but United limited their NPL colleagues to a handful of chances. A Clayton Donaldson goal being ruled offside. 'The Whites' did have a couple of chances themselves, young substitute, Harvey Graves had a chance cleared off the line, whilst Leo Priestley had a shot from distance fly wayward.

United did get a goal back, a Graves header back across goal was met by Jake Park, United's player of the match to bring 'The Whites' within a goal deficit.

The match finished 2 - 3 to Trinity as United now look ahead to their FA Cup tie against Grimsby Borough on August 6th.