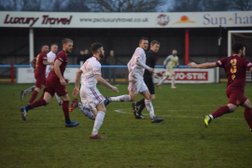 After a week working hard to bring in one or two new faces which ultimately proved fruitless, manager Sam Wilkinson urged his current squad to give everything to bring about a much-needed win.

Give everything they did and their effort could not be faulted, but again the points eluded the Whites.

Matty Wilson was out with a back injury and James Blunden took his place in the back four. Kallum Smith was on the bench after serving his suspension.

The early exchanges were even and chances were few and far between. Ossett took the lead in the 19th minute with a goal of rare quality, the impressive Andy Priestley rising high to glance a header in off the far post.

Lincoln United took the game to the visitors for the rest of the first period and most of the second half but, in truth, the Ossett keeper did not have too many meaningful saves to make.

The visitors looked dangerous on the break and Mike Emery in the home goal made two good saves in the last ten minutes to prevent his side going further behind.

Late on Matt Cotton had the Whites best chance of the game but his close range effort was blocked by the keeper’s legs.

The Whites players reaction as the final whistle blew was one of extreme disappointment which was a clear sign they gave as much as they could.

However that’s now eight games without a win and only 2 points out of a possible 24.

Sam will now resume his search for an addition or two to his playing staff with possibly a target man up front the main priority. There’s quality throughout the squad but a bit more power up front might help players like Andy Hutchinson, Matt Cotton, and Jack Wightwick create and take chances in front of goal and that win that might help the club turn the corner might just happen.