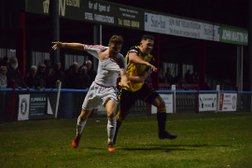 It was an early start and late finish when it came to goals when the Whites took on Frickley Athletic in Yorkshire.

United started with much the same team that triumphed over Spalding United in their last fixture, the only change being new signing Ben Davison leading the line up front in place of Matt Cotton who was dropped to the bench. All the planning and pre-match team talk went out the window a little bit though when the home side took the lead after only 33 seconds. Striker Hazell burst through onto a ball over the top and his poorly executed attempted lob still beat keeper Mike Emery who unluckily lost his footing at the crucial time.

From then on it was a case of much effort but not a huge amount of quality as the teams battled it out for the remained of the first half and the second period.

Tom Garrick thought he'd equalised when his powerful shot hit the underside of the bar but it bounced down and Frickley survived. The home side relied on balls through to their two bustling strikers who were dangerous all afternoon but were dealt with capably by Michael Jacklin and Matty Wilson.

Ben Davison had a chance to open his account but his shot from a right wing cross just cleared the bar.

When all looked lost the Whites piled men forward and in the fourth minute of added time sub Cotton burst into the box and lashed the ball into the far corner to salvage a deserved point. Scott Matthews had put the free kick into the box, Davison won the first head and Jacklin did superbly to keep alive before Cotton finished the job.

There was time only for Frickley to kick off and have one last foray into the United half before the referee blew for full time.

This was a good result for United. The changes Sam Wilkinson has made are starting to bear fruit and to gain a draw at a difficult venue against a form team was a good confidence boost for the playing squad and the club as a whole. The Whites next take on lowly Carlton Town and another positive result will see them climb the table and give great encouragement that the run-in can see the club achieve as high a league place as possible.