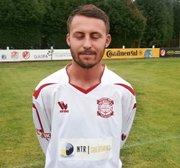 United'd recent good form continued as they beat the league's in-form side Sutton Coldfield Town. They had won their previous four games.

Sutton Coldfield Town took the lead in the 28th minute through Dean Rathbone’s fine effort from outside the box following a weak clearance from a corner.

However, Lincoln United completely turned the tables within 3 minutes. Ben Garrick slotted home less than a minute after than the opener to level the game and he bagged another 2 minutes later to give The White’s a 2-1 lead with a wonderful lobbed effort over keeper, Lee Evans. David Coyde wrapped up a good first period for United just before the break with a rebounded shot following Scott Coupland’s mazy run and drive that the keeper could only parry away.

Sutton had several chances to get back in the game and put one away in the 60th minute as Dean Rathbone scored his and Sutton’s second of the game with a looping header that Phil McGann couldn’t quite tip over. However, United held on well and claimed all three points after Sutton spurred several other good opportunities.