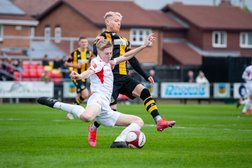 Despite a good second half performance, 'The Whites' succumb to their third consecutive defeat at Hebburn Town FC.

October 16th 2021 saw United make the first of their five trips to the North East to take on recent FA Vase winners Hebburn Town FC. United were forced into a few changes with Max Baker being ruled out through illness, however 'The Whites' were able to welcome back Robbie Smith, whilst Jake Park and Jack Wightwick led the line for United, with George Asplin dropping to the bench.

The first half was, in the main, played within United's defensive half with Hebburn varying attacks and moving the ball well down both flanks. It took eight minutes for the home-side to open the deadlock when Oliver Martin cut in from the left and unleashed a shot from 20-yards, the shot taking a deflection and flying into the net, giving the 500+ in attendance something to cheer.

United had one worthy strike in the first half, Liversidge driving the ball towards goal from 30-yards. Foden in Hebburn's goal was stranded but the ball fizzed just wide of the target. Hebburn should have extended their lead further when neat play down United's left saw Potter released into the box but the midfielder was wasteful with his finish.

Hebburn should have extended their lead further, more good build-up play resulted in a cross along United's six-yard box but the resulting half-volley flew over United's goal. Neat build-up play down United's left then saw Potter released into the box but the midfielder was wasteful with his finish. The lively, Connor Bell, did soon make it two. United lost possession and Hebburn's counter was quick with Bell smashing the ball into the top corner.

United huffed and puffed during the first half, creating nearly moments for the likes of Robbie Smith and Jake Park but a lack of cutting edge ensured Hebburn lead at the break.

The second half saw a change in shape in United and with that, a change in aggression. 'The Whites' were on the front foot and created a number of good half chances, after Hebburn missed a guilt edge chance, similar to the first half, to make the match 3-0.

Firstly, Jack Wightwick worked an angle on the edge of the box but his whipped effort went wide of the pitch. Jake Park from a similar position then had a shot deflected just wide of the post. Robbie Smith then made it a hat-trick of shots to fly past the same post, the wingers curled effort had the power but not the direction.

United were soon down to 10-men, Nichol receiving his second yellow, after picking up his first inside the first minute of the game. United attacked and as Hebburn cleared, it appeared that Millard was fouled but the referee gave nothing. As the home-side counter attacked, Nichol brought down the Hebburn attacker leaving the referee no choice but to give the centre-back his marching orders.

'The Whites' weren't deterred by the player deficit and George Asplin should have done better at the back-post when his effort lacked power, Foden palming the ball away. Robbie Smith did drag United back into the match with 11 minutes to play, good build-up through Smith, Cotton and Asplin released the left-sided attacker who neatly curled the ball into the bottom corner of the net.

Hebburn would have the final two clear cut chances of the match, both falling to substitute Purewal. First a cross from the left found the winger unmarked eight-yards out but his free header went wide of the post. The second found Purewal, unmarked again, but his scissor-kick attempt was comfortably gathered by Spender in goal.

United had one last attack, Millard's long-throw was defended well, Cotton picked up the free ball but his effort from the edge of the box was snatched and dragged wide.