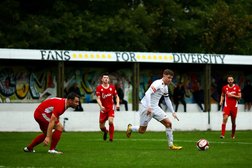 As the underdogs, United got the game underway as they locked horns with second placed Shildon. The opening exchanges saw both sides tussling for control, with a lack of chances at either end. ‘The Whites’ carved out the best chance of the half, flashing a cross in front of goal, but Janssen couldn’t add the finishing touches. Matt Cotton also had a handful of chances, as he danced his way through the Shildon defence, but neither effort could open United's account.

United were resilient in defence and kept Shildon’s chances on goal to a minimal. The visitors had a few half chances from the edge of the box, but nothing troubled Spencer.

The half ended all square and showed promising signs from ‘The Whites’.

Shildon started the second half the better team, almost scoring within the first minute. But a fantastic point-blank reflex save from Spencer kept the scores level.

As United were beginning to take control of the second half, Jack Wightwick was sent off with two yellow cards at the same time, for two different fouls, reducing ‘The Whites’ to 10-men. For all of Lincoln’s hard work and positivity, the task had become a lot harder. Despite being down to 10 men, United were able to defend their box very well, limiting Shildon to long shots from outside the box.

With full-time looming and United clinging on for a point, Shildon were able to force a breakthrough in the 83rd minute, Michael Sweet, heading in at the back post following a free kick.

United then pressed forward as they went in search of a late equaliser. With the final whistle imminent, ‘The Whites’ managed to force a catalogue of corners but United failed to convert in the final stages.

A very positive performance from United ended in a disappointing result, as ‘The Whites’ deserved at least a point from a good performance.

Match Report by Will Chattell