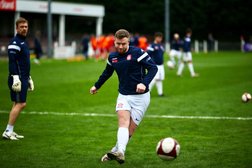 Despite having good chances throughout the match and producing an improved performance in comparison to Stockton Town a week earlier, United fell to their sixth consecutive defeat at the hands of 6th place Dunston UTS FC.

United welcomed new signing Kern Miller to the club within the week and the experience centre-back went straight into Sam Wilkinson's starting 11. Clayton Wilkinson was called in for the right-back position due to the incomprehensible injury list to that position: Jack Arbon, Tristan Skerritt, Simon Biggs and Max Baker. Robbie Smith was out with a hamstring injury and so Jack Wightwick went straight back into the starting line-up after serving his one match suspension. Josh Nichol was also recalled to the starting 11, whilst there was a place on the bench for the young U18, Josh Parker.

The opening exchanges saw Dunston, for the most part dominate the ball, although, United were a threat on the counter. The home-side nearly took the lead in the 4th minute when Foster sliced a clearance off the line and back over his own bar after following a Dunston corner. It was 'The Whites' who took the lead however, Liversidge found the run of Andy Janssen and the young attacker's cross was met by Jake Park 10-yards from goal, reversing the ball back into the goal with his left foot. The striker's first goal since since his double at Tadcaster Albion back in September.

The match's pattern followed a similar theme but Duntson were restricted to shots from distance, whilst Goff, Miller and Foster claimed anything aerially in the box. United nearly doubled their lead on the 21st minute when Liversidge found some space in the area but his low drive was saved by Connell in the Dunston goal, with his shins at the near post.

One minute later and the hosts were level, an almost identical goal to that of United's. A ball in behind United's left-back allowed Liam Thear to cross the ball along the ground for Sado Djalo to tap in at the back post, Goff almost keeping the ball out with his feet.

Dunston nearly took the lead immediately, this time down United's right, but the winger's shot fizzed past the post, thankfully for 'The Whites'. The remaining 20 minutes of the first half saw the north east club prod and probe 'The Whites' but United defended resolutely. It was in fact United who had the best chances to take the lead. First, substitute, Jarvis, replacing Liversidge, was straight into action. Janssen's ball was perfect and teasing but the midfielder's touch was heavy, a better one would have seen him one-on-one with the goalkeeper.

The final moments of the half saw 'The Whites' win a penalty. Again, Janssen involved and the quick feet of the striker saw him draw a foul, the match official pointing to the spot. Cotton stepped up but the keeper's trailing leg kept the ball out and the half ended 1-1.

The second half restarted at a frantic pace. Firstly, Dunston had a penalty shout but the referee waved away any appeals. United had a half-chance through Nichol but Connell was equal to it, whilst Jarvis had a great chance with his head at the back-post but there were disputes as to whether the attacking midfielder was offside or not.

The game's third goal came in the 59th minute when Dunston broached United's back-line, the cross was held up at the back-post and Djalo rose highest to head past Goff.

The match continued to provide entertainment and chances with Dunston nearly extending their lead through a dipping, whipped shot from distance; whilst Janssen was wasteful on the break, his shot lacking power when United were overloaded.

The flow of the match was consistent throughout and young Josh Parker, got through one-on-one with the counter but his final touch was too heavy and Connell smothered the ball to keep the scores level.

As United pressed forward the home-side had chances and whilst one flew past the post, one did go fly into the net on the 83rd minute. A pull-back to the edge of the box saw Porritt drive his shot towards goal, the ball took a slight deflection and skidded underneath the body of Goff in the United goal.

United huffed and puffed to create anything in the final 10-minutes but Dunston defended assuringly. Goff was draw into one final save from the edge of the box, the shot-stopper adapting well to keep the ball out of the net for a fourth time.

'The Whites' had big moments and chances throughout the 90 minutes and had they been taken, it could have been a different outcome. Dunston were assured, moved the ball well and were clinical in the chances they had. On the basis of 'play' Dunston deserved the three points but on the basis of big goal-scoring opportunities, it could have been very different for United.