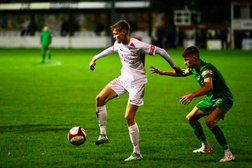 Lincoln United were able to build on last week’s victory, earning a point against Brighouse Town in a 1-1 draw at Ashby Avenue.
‘The Whites’ got the game underway on a blistering cold Saturday afternoon. The opening moments of the game saw both sides jostling for possession, with no real chances created.

As the first half progressed it was Brighouse Town who were creating chances, but the visitors were denied by a catalogue of fantastic saves by James Goff. The United keeper made a fantastic double save before making a brilliant reaction save from a corner to keep the score level.
The early flurry of saves from Goff inspired United to create some chances of their own. ‘The Whites’ first real effort came from a corner, but the shot didn’t test the keeper.

On the 35th minute, Kallum Smith carved out the opener for Andy Janssen. Smith’s first-time cross from the left was delivered to perfection, as Janssen headed home to give United the lead.

Following a late Brighouse freekick, ‘The Whites’ were able to see out the first half and come into the break with a lead.

Lincoln United started the second half much the better side, creating a plethora of chances. The pick of the bunch fell to Louie Jarvis, who’s first time effort flew over the bar from only a few yards out.

As the game progressed it became more end to end, with Brighouse Town winning several corners in the latter stages. As the time ticked down, the pressure increased, and ‘The Whites’ were desperately holding onto their lead.

With three minutes added on ‘The Whites’ were ever so close to another three points. United had fought so hard, but just as it seemed the game was done, the visitors managed to muster up one last chance.

In the 93rd minute, a long ball was headed down in the United six-yard box and smashed in by Brighouse Town.

Heart break at the final whistle for United, who had defended so well throughout and created several good chances. Another promising performances from ‘The Whites’ means they take four points from their last two games.

Match Report by Will Chattell