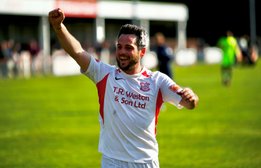 'The Whites' were able to make a 'Great Escape' after weeks of being in contention for relegation with a 3-1 win at Ashby Avenue versus already relegated Pickering Town. This game was accompanied by tension as many fans turned to their phones every so often to see how teams around us in the relegation battle were getting on.

Once the game had kicked off, it created a feeling that both teams were going to go for the whole three points. This was evident as both sides were able to make some good early chances, with the visitor’s first attack going just wide.

'The Whites’ first chance of the game quickly followed; Jake Park received a good ball but reactions from the Pickering goalkeeper prevented United’s forward from managing to get a clear shot away.

Although 'The Whites' were the ones battling for survival, it was the visitors who took the game to Lincoln, with Callum Foster having to scramble back to prevent Pickering from being able to convert a promising counterattack chance.

The opportunities from the visitors proved to be beneficial for them as they were able to keep the majority of the ball and with the help of confusion in The Whites’ backline, took a deserved lead. But with only 21 minutes on the clock, there was still plenty of time for 'The Whites' to get back into the game and much more football to be watched and enjoyed by the 252 fans in attendance.

'The Whites' then proceeded to earn a few chances of their own putting Pickering under pressure, but Chris Funnell’s side wasn’t able to covert. Pickering then forced Jack Steggles to make a spectacular save to prevent United from losing touch of a potential survival result.

A few minutes after this, there were ecstatic scenes within Ashby Avenue as Jake Park was able to bury the ball past the Pickering keeper and to put 'The Whites' closer to that all-important win, which would all but see them safe for another season.

After the break, The Whites were able to get out of the first gear they had been in for the whole of the first half.

The entire game couldn’t get going due to the number of fouls and bookings that the referee was giving against both teams.

As the second half progressed, it became clear that 'The Whites' were getting more confident creating more chances.

One of these was a Matthew Cotton volley towards goal, unfortunately, the shot went straight into the body of the Pickering keeper. Promising, just not the end result that United’s fans would have been hoping for.

About 5 minutes after this, in what proved to be a managerial masterclass from Chris Funnell, the substitute, Cenk Acar, was able to scramble a loose ball into the back of the net.

Now in front, 'The Whites' were able to keep the majority of possession and looked more of a dangerous threat in front of goal. This ended up earning sealing the game, as a late, late strike from yet another substitute, Jack Wightwick resulted in another goal which earned United the three points and survival.

What a game and what a result, with Lincoln winning three games on the bounce for the first team since 2017/18. Here’s to the next season in the Northern Premier League East!