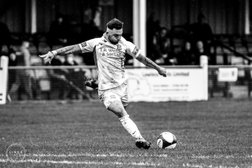 Lincoln United Development Squad faced Lincoln Moorlands Railway in their third Lincolnshire League Cup group game; after two close defeats against Louth Town and Wyberton, The Whites were desperate to try and get three points against their local rivals.

United couldn't have gotten off to a better start as they exploited space down the left and in behind Moorlands, a theme that would be prevalent throughout the match. Asplin whipped in a delicious cross and Janssen should have scored unopposed in the box but his header came back off the under-side of the bar, two follow-up shots from Jarvis and Janssen himself were then cleared off the line by the recovering Moorlands defender.

The Whites continued their fast start. Nicholson picked up a position out wide, delivering a ball to the near-post; Jarvis got in front of his man and poked the ball past the opposition keeper to give United the perfect start.

It didn't take long the lead to double. Asplin causing issues again found Jack Wilkinson whose cross was defended, winning United a corner. Clayton Wilkinson delivered a great ball into the box and young Owen Sheriff rose highest to head the ball into the top corner.

On twenty minutes The Moors afternoon got worse, 2-0 down and down to 10 men. Wilkinson nipped round centre-back, Tom Cass, only to be scythed down with a malicious stamp on the back of his achilles. The match official rightly showed Cass the red card.

Nicholson turned provider again nine minutes later. A measured ball in behind Moorlands saw Asplin latch onto the ball, his first touch taking him round the keeper, before showing composure to roll the ball into the net from a tight angle.

Two minutes later and Asplin was at it again. Jarvis latched onto a lose ball before rolling it through the legs of the pressing defender and releasing United's striker. Good composure and an assured finish across the Moors keeper gave Asplin his second and The Whites their fourth.

The second half saw Moorlands somewhat better than the first with more controlled possession from right to left but aside from one chance in which the striker should have scored, the Newark Road outfit didn't really create a goal-scoring chance.

The first 30 minutes of the second half, United could and should have scored another four. Moorlands' keeper made some fine saves at his near post and at close range from Asplin, Janssen and Jarvis. Before United's fifth arrived, they did have the ball in the net through Trafford Grimes but the Assistant Referee had his flag up.

It was the same player who did get United's fifth. Substitute, Jake Smith, broke down the side of the Moorlands back-line, his ball across the box was reached by the Moorlands keeper but his attempted clearance ricocheted off Grimes into an empty net.

Minutes before the end, Jarvis got his deserved second goal. A ball upfield wasn't dealt with by the Moorlands back line and Jake Smith's header found the run of Jarvis who confidently tucked the ball away.

The Whites were perfect for 90 minutes and even though Moorlands played the game with 10-men for 70 minutes, United were already two goals to the good and looked comfortable. A combination of good quality and high energy saw Lincoln United dominate from start to finish, giving the young side a deserved clean sheet, six goals and three points.