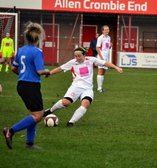 After an unusual week with Nottinghamshire being plunged into a tier three covid zone, the country on the brink of a second national lockdown; you'd be forgiven for thinking this might deter Lincoln United Women who were traveling to the Nottinghamshire borough of Gedling to face Arnold Eagles. Furthermore, United were without seven players for an array of reasons: Demi Barai, Amie Barnes-Ford, Lauren Carter, Zoe Hopwell, Abbie Murrell, Holly Newman and Millie Seaton.

However, no uncontrollable factors would distract 'The Whites' from their fourth win in as many games and their first clean sheet of the season. It took only nine minutes for Nadina Green to get the scoring underway after a fantastic left footed half-volley, albeit with a slight deflection, looped over the home goalkeeper and into the far left corner.

United's work ethic off the ball was a decisive factor in being able to contain Arnold, predominantly to their own half. 'The White's use of the ball was also on display for all to see, this being the case for their second goal. A well worked move through midfield found Lauren Churcher in the box, her neat lay found Duxbury-Mead who chopped the ball back onto her left foot before burying the ball into the bottom corner.

The third wasn't far behind, Duxbury-Mead again the scorer but 'Player of the Match, Frankie Wilson turned provider. An overlapping run found Wilson at the by-line and her drilled cross towards the front post was met with the deftest of back heels by Duxbury-Mead. A goal of real quality from start to finish, showing 'The Whites' superiority.

United had to wait until the final five minutes of the half until they would score again. This time, Green's centre-midfield partner, Heather Pettit, grabbing her third goal of the season. Pettit led the charge from midfield and after some neat interchanging play with Churcher, Pettit's shot nestled into the bottom right corner.

The final action of the half saw another well worked goal involving Green and Duxbury-Mead again. A lovely weighted ball forward found Duxbury-Mead her chest control and set found Green who smashed the ball into the goal, on the volley, from 25 yards out. A scintilating end to a great half of football from the away-side.

The second half saw Eagles come out the blocks with some fighting spirit and they put United's backline under pressure when in possession. The home side mustered two or three long distance chances but fortunately for 'The Whites' nothing to cause any trouble. Eagles were resolute and dug in to try and deny United but chances came and went for Churcher, Duxbury-Mead, Powell and Olivia Smith.

The final two minutes of the game saw United grab the final goals they deserved. Good work down the right from Libby Shipham found Lauren Churcher's forward run, in-turn her ball across the box was met by Duxbury-Mead and with her first touch to round the keeper she confirmed her hat-trick and Churcher's hat-trick of assists.

The last action saw Lincoln United force a corner; Olivia Smith's fantastic delivery was met by captain, Kirsty Dalzell, whose header flew past into the roof of the net, giving the home-side's keeper no chance.

Lincoln United Women's next game is scheduled to be against fellow unbeaten table toppers, Chesterfield WFC. However, we await further confirmation as to what the new lockdown restrictions may mean for women's non-league football.

Player of the Match: Frankie Wilson