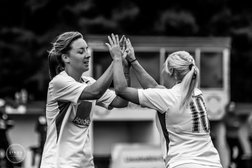 ‘The Whites’ sent out a strong statement to the rest of the teams in the competition with an emphatic performance from start to finish. The manager, Chris Funnell, described the game as a "convincing performance and a convincing win " as Lincoln United picked up all three points against Moorlands.

Lincoln United dominated possession of the ball and were clearly the superior team on the day. ‘The Whites’ played quick, free-flowing football that the Moorlands defence struggled to keep up with which resulted in Lincoln United scoring four goals in each half and limiting Moorlands to just one shot in the whole game.

The Moorlands players were pinned into their own half from minute one thanks to the relentless pressure from 'The Whites'. Abbie Murrell was a huge threat to Moorlands early into the game, forcing two great saves from the Moorlands keeper, Jade Smith. However, Murrell finally broke the deadlock in the 19th minute with a lovely finish inside the box which was assisted by Sally Cairns.

Just a few minutes after scoring the opening goal, ‘The Whites’ quickly doubled their lead. Olivia Smith struck a thunderous freekick which crashed off the top of the crossbar and landed straight onto Tracey Duxbury-Mead’s head who nodded the ball into the net from close range.

It took 23 minutes for Duxbury-Mead to get her second and Lincoln United’s third goal of the game. Wilson made a marauding run down the right wing before producing a pin-point cross into Duxbury-Mead who fired a venomous shot towards goal, leaving the Moorlands keeper with no chance of saving it.

‘The Whites’ put the game to bed just before half time in the 40th minute. Wilson went on another one of her powerful runs down the right wing, which was causing havoc for the Moorlands defence all game. The Lincoln United right-back then claimed her second assist of the game with a brilliant cross which was flicked into the roof of the net by Lauren Churcher.

Lincoln United began the second half as they had ended the first with immense pressure and intensity forcing the Moorlands defence into mistakes and creating multiple openings for ‘The Whites’. In the 53rd minute, a brilliant out-swinging corner from Olivia Smith found Murrell, who struck an incredible first-time volley into the roof of the net.

Second-half substitute, Holly Newman, added a sixth for Lincoln United in the 56th minute. Newman produced a stunning long-range effort towards the goal and lobbed the Moorlands goalkeeper who was left in disbelief.

After banging on the door for most of the first half, Murrell finally scored her hat-trick on the hour mark. Lincoln United's top goal-scorer this season latched on to a loose ball in between the troubled defence before facing the keeper one on one and slotting the ball into the far post with the outside of her boot.

Duxbury-Mead completed her hat-trick and added an eighth goal to Lincoln United's lead. A Churcher corner was whipped and caused a huge goalmouth scramble, Newman's flick-on found Duxbury-Mead who was switched on and reacted first to the loose ball, finishing comfortably into the Moorlands net which was the final dagger into the hearts of the Moorlands players.

Katy Gilbert was kept quiet in the entirety of the game with little pressure coming from the Moorlands attackers. However, the Moorlands keeper, Jade Smith had a contrasting game making multiple saves especially in the last 20 minutes where she single handily saved the score-line from becoming double digits with her heroics in goal.

Lincoln United Women’s come away with eight goals, a clean sheet and most importantly three points in their opening group game of the Trevor Clifton trophy.

The Whites are scheduled to face Sleaford Town next week who will be looking for revenge after ‘The Whites’ defeated them 3-1 earlier on in the season.