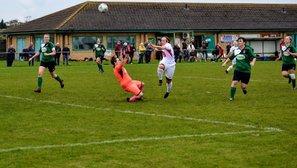 UNITED QUALIFY FOR NEXT STAGES OF THE TREVOR CLIFTON TROPHY

Lincoln United Women’s secured their spot in the next round of the Trevor Clifton trophy with a dominant away performance against Sleaford Town LFC.

The Whites continued their brilliant form in the competition with a convincing victory in their second group stage game against a resilient Sleaford side. The Manager, Chris Funnell, described the performance as the most ‘assured’ that he has seen during his tenure as the boss.

Lincoln United started the game much sharper than the previous week, with the continuous pressure from minute one proving to be too much for the home team. After a succession of early corners, set-piece specialist, Olivia Smith delivered a beautiful in-swinging corner which found the head of the captain, Steph Powell, who towered above her defender and nodded in the first goal for ‘The Whites’ after five minutes.

The Whites continued to dominate the play after the opening goal with intricate passages of play in the Sleaford half, which caused problems for the home team and left them chasing shadows for most of the game.

In the 19th minute, Elise Keyworth opened her box of tricks to beat her defender with ease and pick out a pin-point cross towards Tracey Duxbury-Mead, who fired an emphatic volley into the bottom left corner. Duxbury-Mead managing to score her fourth goal of the tournament and most importantly the second goal of the game.

The Whites forced a plethora of chances for the rest of the first half but were denied any additional goals due to the resilient defending of Sleaford. Katy Gilbert was kept quiet once again in the first half thanks to the fantastic defending from the Lincoln United defence, which was marshalled well by Brock-Taylor and Powell who kept a strong wall in the heart of the defence to prevent any danger towards Gilbert’s goal.

The second half was played similarly to the first with Lincoln United looking to keep the ball on the ground and play around the deep backline of Sleaford.

In her first appearance for ‘The Whites’ since September, Lucy Farrow returned to the starting line-up in style. The midfielder scored a sensational strike from outside the box in the 53rd minute which nestled into the top right corner, leaving the Sleaford keeper with no chance of saving it. It was a well-deserved goal by Farrow who was knocking on the door all game with the chances that she was creating.

On the hour mark, Lauren Churcher scored her second goal of the tournament with a venomous strike from outside the box which proved to be too powerful for the Sleaford keeper, Fenton.

The last 30 minutes were comfortable for The Whites as they kept possession of the ball and nullified any threat of a Sleaford goal, which enabled Lincoln United to see out the rest of the game with ease.

United played an assured and comfortable game throughout the 90 minutes, with Sleaford Town struggling to create any clear-cut chances resulting in another clean sheet for Gilbert and her defence in the competition.

Lincoln United are set to play their final group game of the Trevor Clifton Trophy against Premier Division side, Ollerton Town LFC, on the 2nd May, 14:00 KO.